GIVING LIVESTOCK A LIFELINE DURING DROUGHT 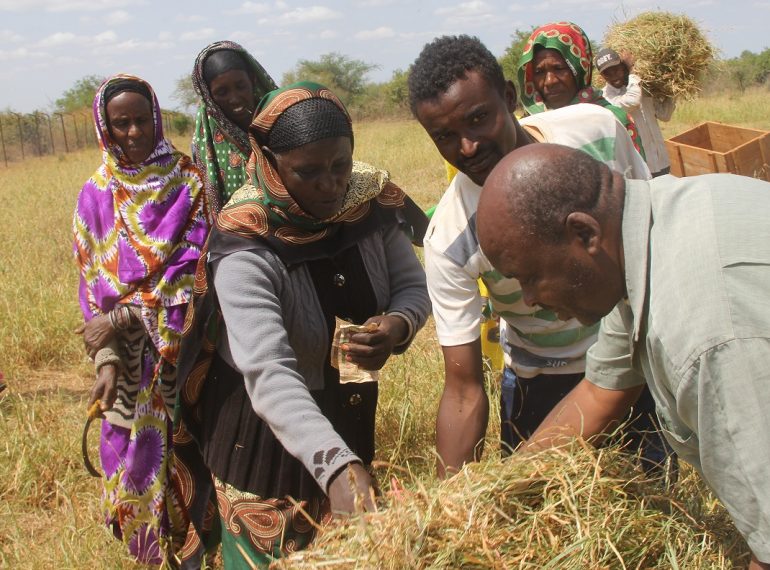 “We expect to harvest 60 bales of hay per acre from the rehabilitated rangeland. We are reaping double benefit by selling a kilo of grass seeds at 1,000 Kenya Shillings (10 US Dollars) while a bale of hay weighing 8kg is sold at 300 Kenya Shillings,” says Fatuma, chairperson of Jaldesa Sauti Moja fodder production group from Badassa.

Jaldesa Sauti Moja Women group at Badassa was identified and supported through training, capital, fencing materials and grass seeds. This is one of the most proactive fodder production groups in Marsabit County with 40 active members who are very passionate about fodder production. A total of 675 kilograms of grass seeds were distributed to 115 willing members from three different groups. The group has already started harvesting seeds and hay. Fodder is available for sale and use during stress period.

“We harvest the grass and remove the seeds before we prepare them for livestock feed and the local market. Every group member knows what needs to be done, we have several years’ experience now. In a year we harvest twice. We plant the first cycle in April and harvest in June,” says Fatuma.
The fodder is planted on a ten acre rangeland that is fenced using strong poles and barbed wires to keep out wild animals like elephants. The grass species is not indigenous in Marsabit County, it originates from Garissa County near Kenya-Somalia border. It is a unique breed of grass that offers high nutrition to livestock and proves to be highly adaptive and drought resistant.

With a 40-strong membership on board, during harvesting they divide themselves into two groups. Each group takes up a specific activity such as cutting grass, harvesting seeds, rolling the grass and fitting into the baling frame which ensures that all bales are of the same proportion.
“We do not use machines, we just use our hands. We have sickles, baling frames, sacks and ropes. We have all the tools that we need to take the work forward,” she says.

Members arrive for work at 8am and hold morning briefings before embarking on the day’s activities. Some of Sauti Moja group members live far from the project site, and others from Sagante, which is 4km from Jaldessa. Others come from Marsabit town.
“We charge a fine of 100 shillings for late comers. This helps to ensure discipline and commitment among the members. However, those with special cases such as attending to the sick members of their families or attending urgent meetings are exempted from fines. Luckily, members are naturally motivated and committed because the project has visible benefits, therefore most times these rules do not come into effect,” says Fatuma.
The women and men are committed, they have a common vision, thanks to professional training facilitated by PACIDA and Kenya Agricultural and Livestock Research Organisation (KALRO). “We have been trained periodically and the original seeds were brought from Garissa, a neighbouring county. We received hay boxes and started as a pilot project under close supervision,” she says. The plot of land adjacent to the fodder field also serves as a community learning centre within the county.

Their main motivations comes from the high demand from the local community. The fodder is marketable during dry season. People come to buy straight from the farms, easing the need to take the grass to the market. Sometimes people come from as far as Chalbi desert to learn about the project and buy grass and seeds. Occasionally they ship the fodder to Marsabit town for sale and to enhance their visibility.

Their main challenge is that they lack proper storage facilities. They need proper housing structures with raised floors for storage of grass away from reach of termites and other pests. This also keeps the harvest dry and protected from rain and morning fog.

The fodder project is part of PACIDA’s continuous efforts aimed at building resilience to drought and adaptive capacity of vulnerable communities in the arid lands of Marsabit County in northern Kenya, supported by Caritas Germany and the German Government’s Federal Ministry of Economic Cooperation and Development.
For more information, write to: pacida@pacida.org

The Pastoralist Community Initiative and Development Assistance (PACIDA) is a development and relief organisation that empowers pastoralist communities through sustainable community-driven development interventions.

PACIDA was founded in 2008 by local scholars and development practitioners who were concerned about the huge and widening humanitarian needs, deepening vulnerabilities and huge development gap in its target region.