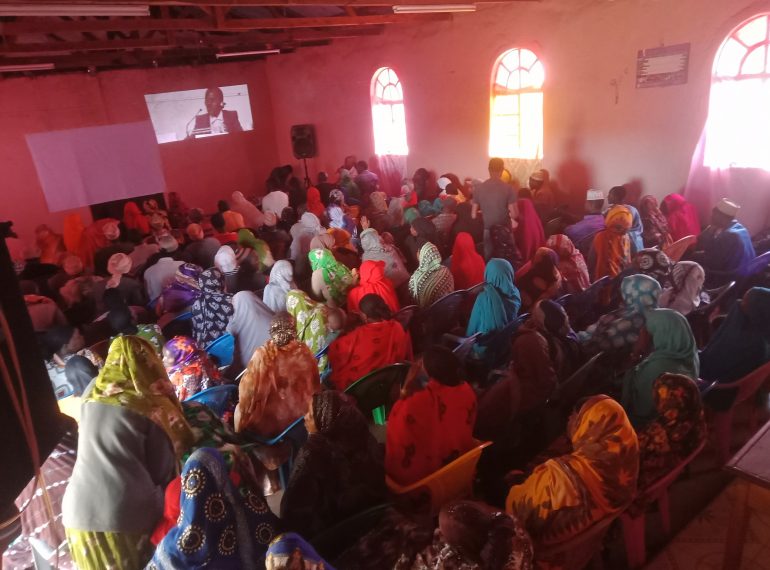 A public forum on climate change and adaptation was recently held in Marsabit town bringing together various self-help groups, local and county authorities, religious groups and residents of Marsabit town. The event enabled various stakeholders in Marsabit County of Kenya to come together and discuss pertinent issues relating to drought and climate change adaptation. In attendance was Kisilu Musya a climate change activist and global campaigner on climate issues affecting farmers in Kenya and East Africa. “We are all actors in the climate adaptation struggle. Our little activities combined contribute immensely in determining the direction our climate will be taking affecting future generations,” Kisilu explained to the audience.

East Africa is particularly vulnerable from the negative effects of climate change. In Kenya, northern counties of Marsabit, Mandera and Turkana lie in the arid zones which face increasingly dry conditions linked to rising temperatures and less rainfall. These conditions threaten the survival of human beings, livestock and plants. Drought combined with overcrowding of livestock on grazing pastures reduces the amount of browse as well as their regenerative capacity. This forces livestock herders to travel further afield in an endless search for grazing fodder for survival of their animals.

In 2018, the northern corridor of Kenya was hit disproportionately hard by climate variability and was one of the most affected areas by climate change regionally. Cycles of droughts have increased in scale and frequency and there is far less ground cover from vegetation as well as sever water scarcity. With funding support from Christian Aid, PACIDA is implementing a climate adaptation programme that is guided by a disaster risk reduction framework that seeks to build drought disaster resilience for communities that are at high risk due to persistent drought.

Kisilu Musya has been filming for more than four years capturing an in-depth story of how climate change is affecting farmers in Kenya. In his documentary titled ‘Kisilu: the climate diaries’ he narrates stories from farmers and pastoralist across different counties of Kenya. In 2016, Kisilu was invited to speak at the UN Climate Change Conference in France.
“Kisilu and the community have several self-help groups where the community stand together to find solutions to their challenges and share knowledge on what they can do to adapt and mitigate climate change,” says Julia Dahr a film producer who has worked with Kisilu over several years. Working with local communities through self-help groups, PACIDA offers training on how to develop action plans linked to County Integrated Development Plan (CIDP), feedback meetings and small-scale project implementation.

“To see Kisilu speaking at the General Assembly was one of the biggest moments of my life, him sharing his story with world policymakers. We made this film for Kisilu’s story to reach as many as possible and to inspire people to take climate action and fight for climate justice,” says Julia Dahr.
A key stakeholder in climate change adaptation is the National Drought Management Authority (NDMA) which is the national agency mandated to establish mechanisms that ensure drought does not escalate into emergencies. PACIDA has provided training and conducted joint field visits with specialists from NDMA. PACIDA’s approach to climate change adaptation is guided by the SENDAI Framework on Disaster Risk Reduction contributing to the attainment of sustainable Development Goals (SDG).

The Pastoralist Community Initiative and Development Assistance (PACIDA) is a development and relief organisation that empowers pastoralist communities through sustainable community-driven development interventions.

PACIDA was founded in 2008 by local scholars and development practitioners who were concerned about the huge and widening humanitarian needs, deepening vulnerabilities and huge development gap in its target region.